Many farmers in tropical and temperate countries survive by managing a mix of different crops and/or animals. The best known form of mixed farming is when crop residues are used to feed the animals and the excreta from the animals are used as nutrients for the crops. Other forms of mixing take place where grazing under fruit-trees keeps the grass short, or where manure from pigs is used to "feed" the fish pond. Traditionally, a wide variety of mixed farming systems has been used worldwide. These systems are essential for the livelihood of farmers and for the production of food and other commodities for the cities and export markets. Even many highly specialized crop and livestock systems in developed and developing countries are rediscovering the advantages of mixed farming. For example, specialized industrial pig and poultry farmers are banned from modern countries such as Singapore, and in western Europe they are forced to exchange their dung surpluses with crop farmers. Moreover, the essence of many modern organic farming systems lies in the mixing of crops and animals.

What is the essence of mixed farming, how important is it, is it something of the past or is it a new vision for the future? Where and how does mixed farming occur and what can be done to make it more productive while at the same time giving due attention to aspects of sustainability? These are the main issues discussed in Chapters 2 and 3, which explain several forms of mixing and ways to characterize them on the basis of the relative availability of production factors - land, labour and capital. The similarity between issues of mixing in agriculture and in society is also apparent. In the same way that dung from animals is recycled for use on crops, it becomes increasingly important in cities to recycle newspapers, glass, tin cans, etc. Recycling can be necessary because of a lack of resources, such as in low external input agriculture (LEIA), and as a result of problems with waste disposal in high external input agriculture (HEIA). 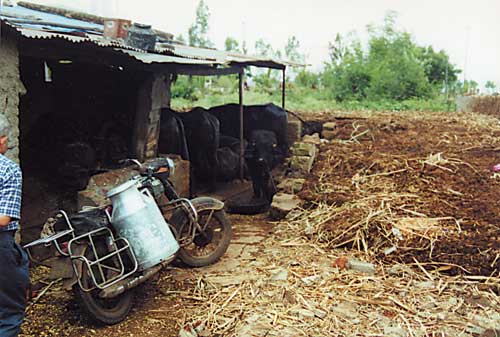 A specialized dairy farm with buffaloes in India: these dung surpluses will be hard to recycle if the neighbourhood turns from rice fields into suburbs