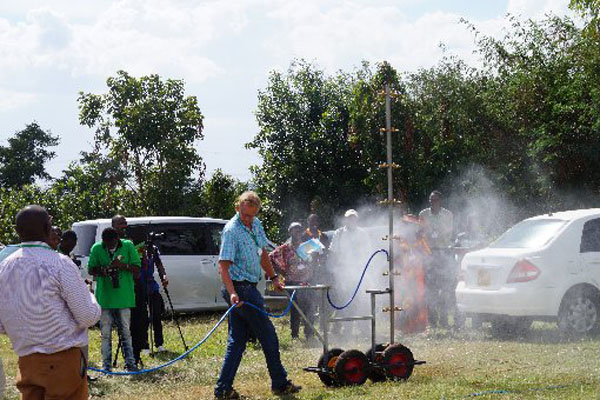 In Summary:
•Latia Farm was established a few years ago by a Catholic priest named Fr Peter Meienberg ,a Swiss missionary, to offer practical training to farmers
•The farm has planted Valuoro and Chonto tomato varieties in three greenhouses each measuring 500 metres squared and hosting 1,100 tomato plants.
•The farm controls whiteflies using yellow sticky traps that attract the insects and blue roller sticky traps to mass trap thrips and aphids

Celestine Manyasi and Evalyn Mwai stood outside a gigantic greenhouse at Latia Resource Center in Isinya, Kajiado County, each holding a notebook and a pen and dressed in white overcoats, headgears and blue footwear made of polythene paper.

It was Growing Solutions Kenya field day, and tens of horticultural farmers had thronged the 60-acre farm to acquire salient tips on successful pesticide-free tomato farming in a greenhouse from Celestine and Evalyn, among other agronomists.

Besides tomatoes, the farmers too were there to get tips on growing leeks, bulb onions, dhania, sukuma wiki (collard greens) and cabbages.

The farm has planted Valuoro and Chonto tomato varieties in three greenhouses each measuring 500 metres squared and hosting 1,100 tomato plants.

How to control tuta absoluta

The tomato plants are in rows of 46 by 50cm, with a 90cm path left from one row to the next to facilitate mechanisation. The farm harvests the tomatoes twice every week.

Due to the sheer sizes of the greenhouses, they use boom sprayers ,and trolleys during harvesting.

Under the tomato plants are shallow plastic pans containing soapy water made from a detergent and pheromones.

The troughs, known as tuta sand water traps, according to Francis Rakita,Project Assistant at Koppert Biological Systems, are used in controlling the notorious tuta absoluta pest by attracting the male tutas and drowning them.

“The water in the trough contains a pheromone artificially made from an insect and then added to water to attract male tutas. The solution is also mixed with the ordinary washing detergents to drown the attracted tutas,” the expert explained, adding the elimination of the male tutas signals the end to the reproduction lifecycle of the leaf miners.

How to mass trap thrips and aphids

The farm further controls whiteflies using yellow sticky traps that attract the insects. The flies, according to research, are attracted to yellow colours.

A blue roller sticky trap, on the other hand, is used to attract thrips and aphids.

Of concern to farmer Philip Mbugua was how the plants growing in the greenhouse are attacked by the pests and diseases yet the structure protects them.

“Most pests and diseases attack the crops at early stages when they are still in the nurseries, but they are mild and difficult to identify at such periods,”Rakita.

“Your tomato plants have either four or five fruits on every truss, how did the fruits balance themselves?” asked farmer Anne Wanja.
“The practice of balancing fruits is known as truss pruning or fruit balancing,” offered Evalyn, who holds a diploma in general agriculture from Yatta Institute of Agriculture. “Truss is a clutter of smaller stems where flowers and fruits develop.”

According to the agronomist, trussing (tying up or binding together) starts with the removal of the first fruit that come out from a tree, which is always smaller to enable production of bigger ones.

It further includes pruning leaves at the end of a fruit truss because they compete with the fruits for nutrients thus making them thinner.
“Removal of leaves around the truss reduces competition for nutrients thus resulting in big and healthy fruits. One ends up with bigger and attractive tomatoes that will be liked in the market,” said Celestine.

“What causes some tomato fruits to burst?” a concerned Mbugua asked.

“This happens due to high calcium. Whereas deficiency in calcium leads to blossom end rot in tomatoes, too much of it results in the bursting of the fruits,” said Celestine.

“A farmer can control the condition by reducing application of CAN fertilisers. In the same vein, add more calcium to the soil when you notice end rot. Deficiency can be known through soil tests.”

However, end rot disease does not necessarily signal the lack of calcium since at times the plants have low intake of the mineral due to prevailing conditions such as high humidity.

“The most important thing farmers can learn from us is the idea that we apply biological pest and disease control mechanisms, therefore, at our farm agro-chemicals are only used in rare cases,” said Rakita, adding that to apply chemical fertiliser, they mix it first with water.

Since there is minimal wind movement within the greenhouses to aid any form of pollination, Latia Farm triggers the plants to pollinate themselves by vigorously shaking them.

“Tomatoes are mostly self-pollinated, yet some have blossoms that don’t open, so they can’t be pollinated by bees or other insects, and indoors the wind can’t get to them. To ensure adequate pollination, we just shake the plant lightly every few days after blossoms appear. We do this by shaking the ropes holding the plant. This will help dislodge pollen inside the blossoms for fertilisation that will set fruit,” explained Rakita.

The practice is also called hand pollination or human assisted pollination and is usually done for two to three days to ensure it has occurred. Upon successful pollination, the flowers will wilt and begin fruiting.

The farm has so far harvested six tonnes of tomatoes between February and March and expects to continue harvesting up to August. The tomatoes were planted in September last year.

They sell their tomatoes to local consumers at Sh100 a kilo for Grade A while Grade B and C are sold at Sh80 and Sh60 respectively.

Latia Resource Center was established a few years ago Fr Peter Meienberg ,a Swiss missionary, to offer practical training to farmers. Programs are offered in form of training, incubation and business support services.

“Today we take fresh secondary school leavers, about 80 students every year, and train them as agronomic apprentices for six months.

The young apprentices pay fees directly or get sponsored,” Jane pointed out.

Growing Solutions Kenya project aims to contribute to the living standards of small and medium vegetables growers in Kenya. The project is implemented by a consortium of 12-Dutch greenhouse technology providers, in partnership with Latia Resource Center (the demonstration site). Field days are open to farmers and other key players in agriculture.

However, those seeking short courses on different farming topics can visit the farm or book for training at the farm. Short visits per day at the farm cost Sh1,500.