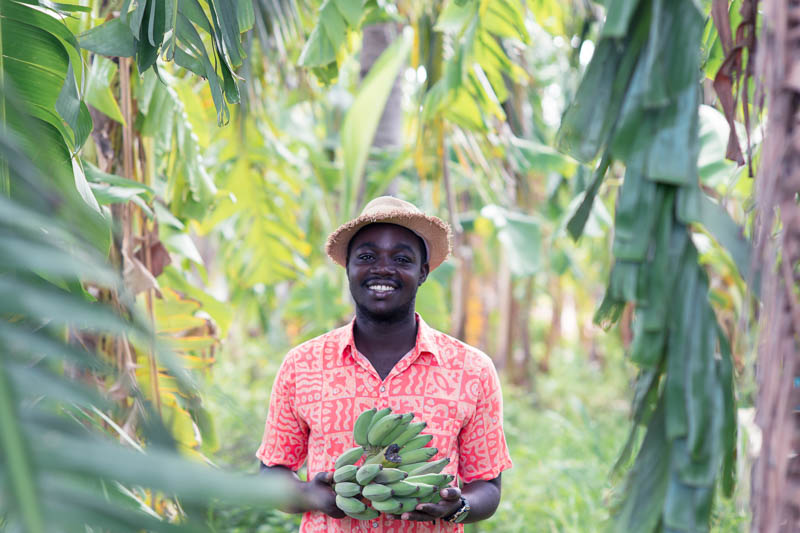 Household budgets can be a tight balancing act in Kenya, with unpredictable weather playing ping-pong with food prices.
The government’s budgets are at risk too – the latest economic survey warns that lack of rain may slow economic growth in 2019.
The World Bank’s most recent economic update on Kenya looks at how to increase agricultural output. “Kenyan farms are generally small and shrinking and are becoming uneconomical to operate,” the April 2019 report says.
At the launch of the report, Prof Hamadi Boga, head of research at the agriculture ministry, highlighted the role of small-scale farmers as “the backbone of Kenya’s agriculture”.
“The smallholder farmer is the main farmer in this country constituting about 70% to 80% of the farming community,” said Boga.
Agriculture accounts for about a third of Kenya’s economy, according to the National Bureau of Statistics. But are up to 80% of farmers in the country smallholders?
We went digging.

We asked Boga for his sources and he sent us the abridged version of his ministry’s 10-year plan for 2019 to 2029.
Titled the Agriculture Sector Transformation and Growth Strategy, the plan estimates there are 4.5 million small-scale farmers, including “3.5 million crop farmers, 600,000 pastoralists and 130,000 fisherfolk”.
A farmer is defined as “a person who owns, works on, or operates an agricultural enterprise that cultivates land or crops, or raises animals including livestock and fish”.

Who is a ‘smallholder’ farmer?

It depends on who you ask. Kenya’s agriculture ministry defines smallholder farmers as those working land between 0.5 and 5 hectares. Medium-scale farms are 5 to 50 hectares, and bigger farms are large-scale.
These definitions are based on a 2006 national household survey, it says. But it also notes thatcurrent national agricultural policy defines small farms as 0.2 hectares to 3 hectares, medium as 3 to 49 hectares and large as 50 to 30,000 hectares.
A smallholder farmer “currently and commonly” referred to someone with “10 acres (4 hectares) and below”, Dr Timothy Njagi, a development economist and research fellow at agriculture think-tank Tegemeo Institute, told Africa Check.
And Dr Pascal Kaumbutho, an engineer in rural development who works with smallholder farmers, said a small-scale farm was considered to be between 0.5 acres (0.2 hectares) and 5 acres (2 hectares).
In a 2015 study on smallholder farmers, the Food and Agriculture Organization says there “is no unique and unambiguous definition of a smallholder farmer”. Context matters, because farm size, or income, or even agricultural output have been used to categorise farmers, the UN agency adds.
“The statistical definition of a smallholder is, therefore, very difficult,” the FAO says. But even with these difficulties, “smallholder farmers do exist”, and countries define them according to local conditions.
In Kenya, “the typical smallholder farm size is 0.47 hectares”, the study says. But it adds thatbased on a 2-hectare threshold, classifying farmers who hold less than this as smallholders would result in them accounting for nearly all of the country’s arable sector.

How did the ministry arrive at this figure?

The ministry’s estimate of 4.5 million small-scale farmers came out of calculations of data from the 2016 economic survey, modelling using data from the International Labour Organization, “different assumptions based on county level populations” and “information from the 2014 social accounting matrix for Kenya” released in 2018.
“I don’t know how they estimate from [the social accounting matrix] the number of smallholder farmers in Kenya, because satellite [specific to agriculture] accounts with physical data has not been published,” Prof Alfredo Mainar Causapé, the lead author of the 2014 social accounting matrix, told Africa Check.
Causapé has done extensive research on the subject, and directed Africa Check to the the statistics bureau’s statistical abstract 2018. It shows that since 2012, small farms have produced 73% of Kenya’s marketed agricultural crop.
The document defines small farms as between 0.2 hectares and 12 hectares, much larger than the agriculture ministry’s two definitions. It also includes some farms “outside this range”.
But neither the 10-year plan nor the other documents give an estimate of the total number of farmers in Kenya.

Kenya has not officially counted farmers

Accurately estimating the number of smallholder farmers in Kenya is “usually very difficult”, Dr Timothy Njagi, a development economist and research fellow at agriculture think-tank theTegemeo Institute, told Africa Check.
He said this is because Kenya has never done an agricultural census.
Such a census would provide an exact number of farmers, their individual enterprises, the amount of land they used and any investments such as in workers and inputs, Njagi said.

‘Numbers thrown around for decades’

The estimate of 70% to 80% was old, Dr Pascal Kaumbutho, an engineer in rural development who works with smallholder farmers, told Africa Check.
“These are numbers that have been thrown around for the last three decades,” Kaumbutho said. He added that there hadn’t been a recent study on the extent of small-scale farming.
Mapping it out would help smallholder farmers. “These are people who need a lot of technological support, markets and subsidies from the government.”

Conclusion: No data supports claim that 70% to 80% of Kenya’s farmers are smallholders

At the launch of a World Bank report on improving farming in Kenya, agriculture ministry research head Prof Hamadi Boga said smallholder farmers, “the backbone of Kenya’s agriculture”, made up 70% to 80% of the country’s farming community.
The data points to the majority of farmers in Kenya being smallholders, but doesn’t give the total number of farmers. Kenya hasn’t yet done an agricultural census, an expert said.
Farm sizes are also defined differently. Without reliable data, Boga’s claim cannot be proven at this time.