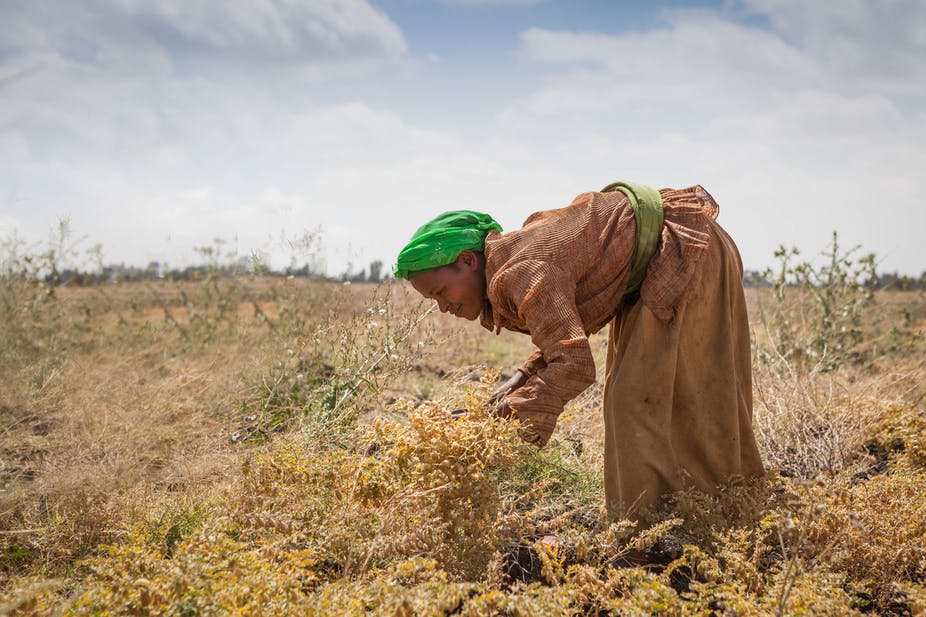 A great deal of research on agriculture in Africa is organised around the premise that intensification can take smallholder farmers out of poverty. The emphasis in programming often focuses on technologies that increase farm productivity and management practices that go along with them.

Yet the returns of such technologies are not often evaluated within a whole-farm context. And – critically – the returns for smallholders with very little available land have not received sufficient attention.

To support smallholders in their efforts to escape poverty by adopting modern crop varieties, inputs and management practices, it’s necessary to know if their current resources – particularly their farms – are large enough to generate the requisite value.

Two questions can frame this. How big do farms need to be to enable farmers to escape poverty by farming alone? And what alternative avenues can lead them to sustainable development?

These issues were explored in a paper in which we examined how much rural households can benefit from agricultural intensification. In particular we, together with colleagues, looked at the size of smallholder farms and their potential profitability and alternative strategies for support. In sub-Saharan Africa smallholder farms are, on average, smaller than two hectares.

It’s difficult to be precise about the potential profitability of farms in developing countries. But it’s likely that the upper limit for most farms optimistically lies between $1,000 and $2,000 per hectare per year. In fact the actual values currently achieved by farmers in sub-Saharan Africa are much less.

The large profitability gap between current and potential performance per hectare of smallholder farms could, in theory, be narrowed if farmers adopted improved agricultural methods. These could include better crop varieties and animal breeds; more, as well as more efficient, use of fertilisers; and better protection from losses due to pests and diseases.

But are smallholder farms big enough so that closing the profitability gap will make much difference to their poverty status?

Our research suggests that they are not. Even if they were able to achieve high levels of profitability, the actual value that could be generated on a small farm translated into only a small gain in income per capita. From this we conclude that many, if not most, smallholder farmers in sub-Saharan Africa are unlikely to farm themselves out of poverty – defined as living on less than $1.90 per person per day. This would be the case even if they were to make substantial improvements in the productivity and profitability of their farms.

That’s not to say that smallholder farmers shouldn’t be supported. The issue, rather, is what kind of support best suits their circumstances.

Productivity and profitability
In theory, it should be quite simple to calculate how big farms need to be to enable farmers to escape poverty by farming alone.

To begin with, it’s necessary to know how productive and profitable per unit area a farm can be. Productivity and profitability – the value of outputs minus the value of inputs – are functions of farmers’ skills and investment capacities.

They are also dependent on geographical contexts. This includes soils, rainfall and temperature, which determine the potential for crop and livestock productivity. Other factors that play a part include remoteness, which affects farm-gate prices of inputs and outputs, and how many people a farm needs to support. 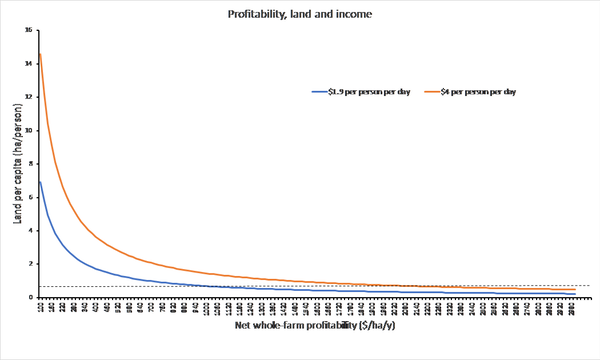 Combinations of land per capita and net whole-farm profitability that would generate 1.90 (blue) and 4 (orange) dollars per person per day. The median land per capita values of rural households from all 46 sites in 15 countries of Sub-Saharan Africa were below the horizontal dashed line (0.60 hectares per person). Author supplied
So, how do these values compare with the situation in sub-Saharan Africa?

It has been estimated that about 80% of farms across nine sub-Saharan countries are smaller than two hectares. These sites would need to generate at least $1,250 per hectare per year just to reach the poverty line. Sites at the lower end of the range cannot escape poverty even if they could generate $3,000 per hectare per year.

Unfortunately, there is limited information about whole-farm net profitability in developing countries. But in Mozambique, Zimbabwe and Malawi, for example, the mean values of only $78, $83 and $424 per hectare per year, respectively, imply that even $1,250 appears to be far out of reach for most small farms.

It’s difficult to interpret information from developed countries in developing country contexts. Nevertheless, gross margin values for even the most efficient mixed farms seldom exceed around $1,400 per hectare per year.

These values are similar to gross margins using best practices for perennial cropping systems reported in a recent literature survey of tropical crop profitability. The study drew on data from nine household surveys in seven African countries. It found that profit from crop production alone (excluding data on livestock) ranged from only $86 per hectare per year in Burkina Faso to $1,184 in Ethiopia. The survey mean was $535 per hectare per year.

From this overview we must conclude that, even with very modest goals, most smallholder farms in sub-Saharan Africa are not “viable” when benchmarked against the poverty line. And it’s unlikely that agricultural intensification alone can take many households across the poverty line.

What is the takeaway?
We certainly do not suggest that continued public and private investments in agricultural technologies are unmerited. In fact, there is evidence that returns to agricultural research and development at national level are very high in developing countries. And there is evidence that agricultural growth is the most important impetus for broader patterns of structural transformation and economic growth in rural Africa. But realistic assessments of the scope for very small farmers to farm themselves out of poverty are necessary.

Farmers are embedded in complex economic webs and increasingly depend on more than farm production for their livelihoods. More integrated lenses for evaluating public investment in the food systems of the developing world will likely be more helpful in the short term.

Integrated investments that affect both on- and off-farm livelihood choices and outcomes will produce better welfare than a narrow focus on production technologies in smallholder dominated systems. Production technology research for development will remain important. But to reach the smallest of Africa’s smallholders will require focus on what’s happening off the farm.