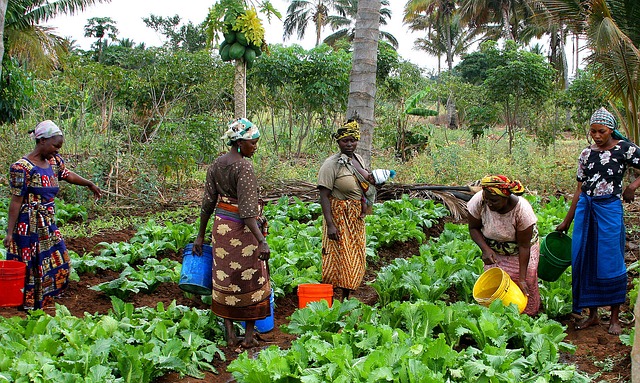 Despite the recent advances in the fight against poverty and hunger, food insecurity is still a pressing problem. Smallholder farmers dominate production, and most African countries have not been able to realise a successful agricultural revolution. While the agricultural sector has traditionally relied on export crops, the greatest market potential for most African farmers lies in the domestic and regional market for food staples. Hence, agricultural growth in the food sector offers the largest potential for poverty reduction and can thus not only improve food security through higher availability of local food in the market but also through higher income of the rural poor. The relation between increased production and sales of food crops and food security is, however, not straightforward at the level of the producer household. Increased commercialisation of food crops may result in higher male control over resources, which in some cases has been shown to have negative effects on household nutrition.

Like most African countries, Tanzania has a history of state control over marketing in the agricultural sector. While state control has decreased over time, private-sector marketing is still rudimentary. Within this context, the Integrated Project to Increase Agricultural Productivity (IPIAP) intended to stimulate the production of staple food crops (maize, rice, soy, and beans) through a value chain approach built around the strengthening of farm organisations. The project applied “an inclusive business model to create market opportunities for farmers which are commercially viable and scalable to small-scale farmers, processing industry, buyers and agribusiness dealers to ensure reliable and timely access to quality inputs, sufficient quality, quantity and reliability of supply for processors/buyers”.

This results in the following evaluation questions:

The evaluation strategy was based on randomised implementation of the project. The project followed a location-based approach in which target locations were selected and all eligible FOs and relevant agro dealers and other business in these villages were included in the project to benefit from locational synergies. We agreed that within each of the six project district, eligibility of wards would be determined based on the crops grown and the absence of (planned) related interventions to avoid contamination. From the eligible wards, treatment wards were randomly selected. However, ward numbers are small, especially for the control group, where not all FOs were identified, and the sample was not balanced. In addition, there may be spill overs from activities targeted at government extension agents and agro dealers.

We attempted to mitigate the data problems by adapting our econometric strategy. We used a matching estimator, as well as a double-robust estimator that uses a propensity score to weight ordinary least squares (OLS) coefficients. The advantage of this technique is that it allows for misspecifications in either the propensity score or OLS models. However, as it assumes parallel trends, we interpret the results with care.

The treated FOs in our sample are Kapunga SH SACCOS, Kongolo, Ruanda Majenje, Njalalila, Madibira AMCOS, Iyawaya Group, Mshewe Irrigators, Ilembo Usafwa AMCOS, Jipemoyo AMCOS, Ulenje AMCOS, Iwindi AMCOS, Ndalambo Coop. Society, Tunduma SACCOS 1, Tunduma Mixed Producers 1, Momba Farmers Association 1, Tunduma Border Market1, Migoneka AMCOS, Nandanga Association, Mpemba Association, Ruanda AMCOS, Imasha AMCOS, Hasambo AMCOS, Upendo SACCOS, Shiwinga AMCOS, Malolo AMCOSS, Isalalo AMCOS, Isumi AMCOS, Mlangali AMCOS, Mwanda AMCOS, Nkana AMCOS, Insani AMCOS, Chama cha Wafugaji Isangu. We find that agricultural productivity in this treatment group increased, relative to the change in productivity in the control group. This might be explained by a larger observed increase in the use of improved technologies in the treatment group relative to the control (who decreased the use of improved seeds). We find no effect of the project beyond productivity. Prices and the percentage of crops sold does not appear to increase due to the treatment. This could imply that the input and technology-related project activities were effective, whereas the project’s efforts to link to markets were not. The persistent government policy of banning crop exports severely limits the interest of traders in engaging in contracts with farmers, severely limiting the opportunities for improvement.

We supplemented the survey data with an artefactual field experiment that analysed how the labour division between spouses affects spending decisions. We find that couples in our sample have a special sensitivity to private and jointly produced income: additional labour on a joint project does not affect spending power, but additional earnings from a private project does. We find a correlation with choices in the experiment and farm production. This suggests that the effect we measure has important consequences. For example, when market crops become more dominant at the cost of women-controlled food crops, this may decrease their bargaining power and thus ultimately hamper household nutrition.