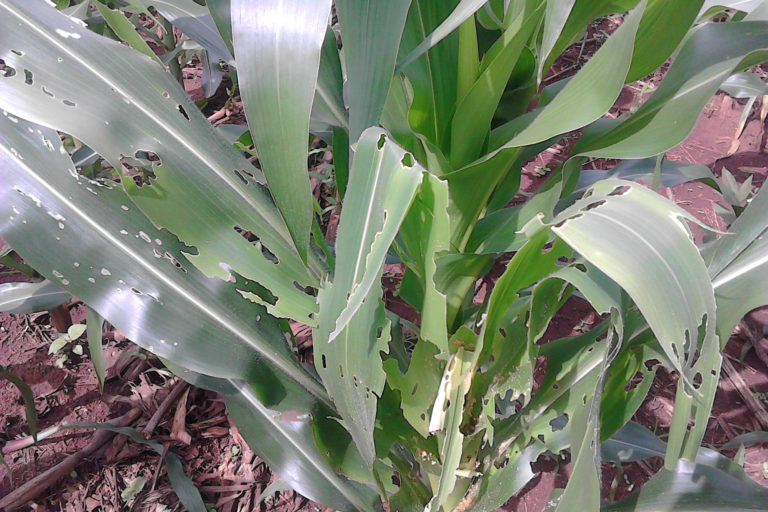 How does fish soup end up on a maize plant? Farmers in Malawi developed the idea to protect their plants from the invasive fall armyworm (Spodoptera frugiperda). They found that dabbing soup on their maize attracted predatory ants that fed on the fall armyworm, helping control its incidence in their fields.

“And it’s not just any soup,” said Anne-Sophie Poisot, an advisor in sustainable agriculture for the UN’s Food and Agriculture Organization (FAO).

“The farmer said which specific fish, how to prepare the soup, how much dilution is necessary. This is farmer science.”

Farmers across Africa are struggling with the often devastating spread of fall armyworm, an invasive species from the Americas that was first observed in West and Central Africa in early 2016. In its larval stage, armyworm feeds on over 80 plant species – including maize, a staple crop in many parts of the continent. As an adult moth, S. frugiperda can fly up to 100 kilometers in a single night. Fall armyworm is now confirmed in every African country south of the Sahara, except for Lesotho, due to its elevation. It has also been found in Egypt and spread into much of Asia.

The overwhelming majority of African farmers are small-holders, facing pests like armyworm with limited capital or support from government agricultural extension workers. The recipe for fish soup, along with all sorts of other information about where fall armyworm’s been spotted and suggestions for effective and inexpensive ways to control it, was shared over WhatsApp groups set up by organizations like FAO that include farmers, extension workers, and researchers like Poisot.

“Just the other day, a farmer trainer from Malawi was sharing on a WhatsApp group about how mulching has helped reduce infestation levels in their fields,” Poisot told Mongabay.

Across Africa, technologies like WhatsApp, alongside radio and even portable video consoles, are helping smallholders confront a fast-moving, ravenous invasive pest.

Mass extension for a new pest

As fall armyworm spread through Africa’s small farms, both farmers and governments responded by spraying large amounts of pesticides, even though these are typically expensive, harmful to human health and local biodiversity, and are not necessarily effective in controlling armyworm, depending on which kinds are used and when.

“If they use too much pesticide it will be bad for their health, bad for their wallet, and also take away all the [pest’s] nice natural enemies,” Poisot said.

Farmers also lacked good information, particularly in remote areas. In most of Africa, there are not enough agricultural extension agents to educate farmers about pests like the fall armyworm. According to a 2015 study, there is just one extension worker for every 950 farmers in Kenya; in Uganda that number is 1 per 2,500 farmers [and 1 per 3,420 farmers in Nigeria’s Kaduna State. This makes communication platforms such as radio programs, along with community meetings and even phone apps, especially important when it comes to pest management.

“The fall armyworm is in countries to stay,” said Poisot. “It is not a pest that can be eradicated. But it can be brought to a level where it is not seen as a huge threat by farmers. That means that we have to educate farmers, because we cannot solve the problems with a few quick actions.”

The responses recommended by FAO, CABI, and others focus on integrated pest management techniques. These can include the cultivation of natural predators like pathogens and parasitic wasps, using biopesticides like Neem, and incorporating cropping techniques that keep the fall armyworm from feeding on maize plants. It also includes traditional techniques developed by farmers, such as the use of ash or sand in maize whorls to kill the fall armyworms, spraying chili solution to repel the armyworms, and rubbing lard – or fish soup – on maize stalks to attract natural predators such as ants.

In order to make sure farmers understand these management techniques, these organizations need to be able to reach them in the first place. That’s where mass extension comes in: programs and technology that reach a large number of people with the kind of information and services that were once personal interaction with extension agents.

“There is the balance between reaching many people and having relatively little local impact, or reaching relatively few people and having more local impact,” says Stefan Toepfer, a research scientist at CABI and lead author of a recent opinion paper, Communication, information sharing, and advisory services to raise awareness for fall armyworm detection and area‑wide management by farmers.

A radio broadcast in Ethiopia opens with the host introducing listeners to Aynadis Tilahun, a 45-year-old maize farmer.

“Mrs. Aynadis, your farm is so green and I love it,” the host says. “Can I take a picture?”

“Be my guest,” she replies. The episode is one of dozens created by Farm Radio International, a Canadian organization that uses radio to support farmers across 11 African countries.

“How do you know if your plant is okay, or if it is infested by fall armyworm?” the host continues.

“Someone with knowledge of what an infested plant looks like can spot that easily,” Tilahun says. “First, you can look for cut leaves. The pest eats them, and you can see that from a distance. The other sign is that you see a small, powder-like substance that is whitish in color. Those are the eggs. You have to destroy the eggs before they grow.”

The episode also features a natural resource expert explaining how farmers can monitor their fields and which pest-control techniques they should be employing.

Eighty percent of households across Africa have a radio set, according to Karen Hampson, Farm Radio’s senior program development manager.

“It’s not like we’re having to support new technology or equipment or smartphones,” Hampson told Mongabay. “We work through existing stations.” Researchers want to create communication channels that offer the same kind of interaction and feedback that a farmer would get if they were able to speak to an extension agent one-on-one.

“The key for us is making radio into a two-way communication tool,” said Hampson. When farmers are given new information or being taught a new management tool, they will likely have questions. These radio programs allow them to call in using cell phones and either interact with someone on the spot or leave a message and get a call back, which also helps save their phone credit. Alternatively, sometimes hosts will go through all the voicemail questions and group them together, then bring in an expert to answer them on the air.

“It’s really important that we keep building the interactive loop that farmers would have if they talked to an extension worker,” Poisot said. “They would have had a one-on-one interaction, they could ask their questions, rather than pushing messages to farmers that are somehow standardized and might not apply to their situation or that farmers might not fully understand and therefore will ignore.”

Farm Radio International has been running their projects for over a decade now and, according to Hampson, the average rates of people who decide to try something new after hearing a program is around 20%. She also says that the more interactive the programs are, the better the uptake rates.

Currently, Farm Radio is running programs on fall armyworm in Ethiopia and Uganda in partnership with the Centre for Agriculture and Bioscience International (CABI). CABI also ran a similar program in Zambia from December 2018 until this past March, working Ministry of Agriculture in Zambia through the National Agricultural Information Services (NAIS).

There’s an app for that

The effort to provide more interactivity has also led to a proliferation of smartphone apps for both farmers and extension agents. Many of these can be used offline, because farmers are not necessarily able to be online all the time and internet credit can be expensive.

CABI has the Plantwise app, which offers factsheets and diagnostic tools. FAO has created FAMEWS, the Fall Armyworm Monitoring and Early Warning System, which allows farmers and extension agents to submit information on fall armyworm sightings as they are scouting their fields and checking. The FAMEWS app also has an add-on, Nuru, which helps farmers recognise and report FAW themselves.

CABI has also created two game simulation apps for both farmers and extension agents that take them through the planting process and help them identify different pests and evaluate the best and most cost-effective control methods against them.

While radio programs and apps have done a lot to raise awareness about the fall armyworm and some best management practices, there are still obstacles.
One challenge is choosing which communication methods to invest the most in. Communicating face-to-face with farmers about pest control and other things, for instance by holding community meetings, provides the greatest impact, but reaches far fewer people than mass communication methods. At the other end of the spectrum, methods like flyers are easy to produce and disseminate, but language constraints and poor literacy means these are generally lacking detail and often consist mostly of photos. Phone apps can be used offline, but users still need to have a smartphone to access them.

Farmer field schools, in-depth educational programs run by FAO to train farmers to manage pests like fall armyworm, are able to provide a great deal of detail and personal interaction, but cost far more to implement and reach smaller numbers of people in concentrated areas.

While these communications programs are vital to combatting the fall armyworm and stabilizing food security, Toepfer says, they will never be able to reach 100% of farmers. “Farmers in remote areas with no electricity, no smartphone, they’re just left out,” he told Mongabay.

Smallholder farmers have been dealing with pests for years and have developed their own strategies. A range of control methods, using things like lard, chili sauce, sand, and fish soup are anecdotally quite effective and CABI is currently doing a study on these local methods in Ghana and Zambia. According to a recent paper by Allan Hruska, FAO’s principal technical coordinator for fall armyworm, many of these practices were already common fall armyworm ever showed up.

“We need a paradigm shift away from just a transfer of technologies to instead working with and empowering farmers,” Poisot says. “Moving from ‘we have a technology and we know it’s going to work so we give it to farmers who, if they are smart, will adopt it’ to a model in which you engage farmers thinking they have valuable ideas and they can be strong contributors to co-creating solutions.”