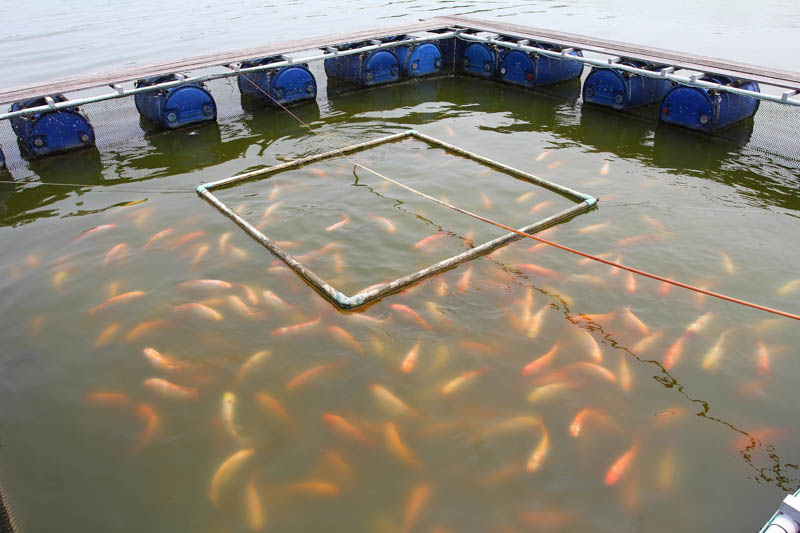 The atmosphere at the 16th edition of Seeds of Gold Farm Clinic at the National Coffee Research Institute (NaCORI) in Kituuza, Mukono District was expressed by farmers being attentive to learn best methods applicable in the farm enterprises exhibited. One such an enterprise was where scientists took farmers through the best practices to employ when engaged in fish farming. A walk to the fish pond demonstration facility revealed the attention farmers paid to the scientists.

A fish pond system consists of a structure which must be constructed where there is access of continuous flow of water all year round. This includes shallow wells, valley dams, lakes and rivers. The best scenario is to have a pond filled up by gravity flow because any other means such as water pumping may lead to prohibitive operation costs. There has to be canals for supply and drainage of water to and from the pond compartments; and water control structures to regulate entry and exit of water into and from the pond compartments.
After digging the pond with a recommended 500 square metre, farmers are expected to apply lime which is mixed with water to kill parasites and improve the soil structure.

The pond must be 1.5 metre deep and the walls have to be slanting for free flow of water and easy drainage. Concrete fish tanks are good for farmers especially where there is no frequent water flow. It must contain water seepage for control of water flow and there should be a provision for aeration. This method is highly recommended for farmers who have small pieces of land.

Fish is stocked after two weeks from application of lime and it is recommended that two fish fingerlings are stocked per one square metre.
This means a farmer is capable of breeding 2,000 fish fingerlings in a 500-square metre pond.
The ration for male and female must be considered upon the one male mating three female fish species in a pond.

Good quality fish regardless of the species should be uniform in size and uniform colour. Farmers can access good quality fish fingerlings at Naro research institutes and farmers who are carrying out certified fish hatchery. Farmers can as well obtain tilapia fingerlings from the same pond because they have the capacity to reproduce while in the ponds but for cat fish this has to be done in the hatchery. It is advisable to cover the ponds with nets to prevent predators from entering the pond and scavenging the growing fish species. It is also important to keep the grass around the pond short and setting traps for predators such as lizards.

Feeding is important and farmers are expected to carry out routine sampling to check the health status of the fish. Most are advised to feed their fish using artificial fish meal processed using mixture of maize brand, soybean cake, silver fish, salt and blood meal. Usually fish feed for starters costs Shs2,500 per kilogramme whereas mature fish feeds will cost a farmer Shs1,800 per kilogramme. It is advisable to feed the fish twice a day during morning hours and in the evening but the starters can be fed four times a day.
This is by measuring and throwing the pellets at the feeding points where fish are capable to come and consume them at a go.

Ntaawo told the farmers that harvesting of fish from the pond should be done at will. This is done by closing the inlet and bending the outlet pipe for water to drain. A service net is passed through the pond and when the desired number is harvested then water can be refilled in the pond.
Fish which is well fed will take nine months to weigh one kilogramme or more and this is the required weight which is ready for harvesting.
It is the contention of the scientists that the market for fresh fish is ever available, fish farmers can sell their fish at the pond site to vendors or in the nearby local markets.

Polycap Semakula a resident of Kisoga Village in Mukono District has been breeding tilapia fish for two years now. After attending several Seeds of Gold Farm Clinics, he was convinced to take to farming. “I started with 500 fingerlings in a 10 square metre pond, I have now constructed two ponds which have more than 5,000 fingerlings. I usually purchase fish seed from the Fisheries Institute in Kajjansi and the feeds from Ugachick. I sell the harvested fish on my farm and I also teach farmers interested in breeding fish on my farm at a fee,” he notes.